MANILA, Philippines – BEMAC Electric Transportation Philippines, Incorporated, a subsidiary of Uzushio Electric Company of Japan, will start producing 3,000 units of electric motor-powered tricycles or e-trikes for distribution within the year.

This was after the Department of Energy (DOE) issued a notice of award to Uzushio Electric of Japan and its local partner, BEMAC, for the e-trikes production.

The auction was carried out in May last year, with BEMAC edging 4 other companies. 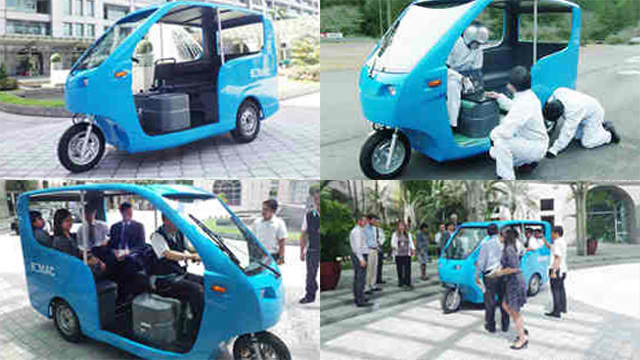 After rounds of price negotiations, the final price was set at around $30 million for the production, delivery, and servicing of 3,000 electric tricycles.

The Philippines is home to over 3.5 million gasoline-fueled tricycles – a vehicle most commonly used as public transportation over short distances.

In an effort to reduce the environmental impact of these tricycles, the government announced in 2012 a project to replace 100,000 units with e-trikes.

Yvonne Palomar Castro, BEMAC’s vice-president for operations, sales and marketing, said the company is excited about being a catalyst for change in helping resolve transportation problems and their environmental impact.

"As an EV (electric vehicles) advocate first, I am glad that we got this award because we are committed to provide an EV technology and after-sales support system that will be the new benchmark in the local EV industry," Castro said.

In 2011, Uzushio launched an electric vehicle development program – a year before the DOE announced the e-trike project.

In December 2012, Uzushio developed a prototype built around the needs of the DOE and the Philippines.

Now under the established local subsidiary BEMAC, the company has prepared systems for the manufacture, sale, and distribution of 6,000 vehicles yearly with cooperation from local partner companies, notably with Almazora Motor Corporation as its local assembly partner.

In a recent visit to the country, Uzushio Electric president Masato Oda said the company is "very serious in its EV business in the country" and is looking at possibilities of introducing more variants including 4-wheeled EVs.

After the introduction of the 3,000 units, the DOE is planning future projects and bids to further replace 17,000 additional vehicles with e-trikes.

At the same time, BEMAC is eyeing expanding to other Association of Southeast Asian Nations (ASEAN) markets, as it expects demand for its electric vehicle after seeing its first success in the Philippines. – Rappler.com