MANILA, Philippines - Officials of a startup firm manufacturing electric tricycles (e-trikes) are in talks with officials of the University of the Philippines to set up an e-vehicle system inside the campus in Diliman, Quezon City.

BEMAC Electric Transportation Philippines Inc. recently unveiled the "UP e-kot e-trike," a mock-up of the iconic UP Ikot and Toki jeeps which take students around the Diliman campus, during the launch of the firm's production facility in Carmona, Cavite. 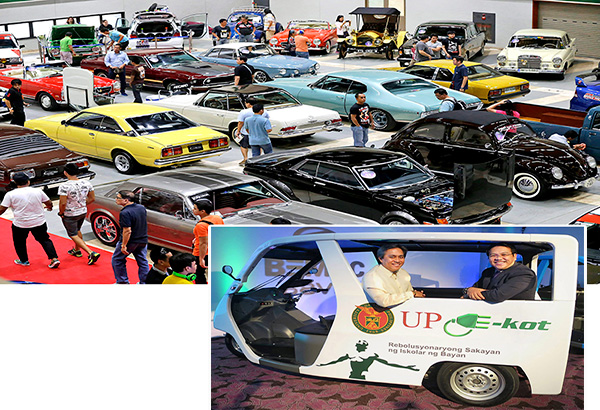 Christian Tolentino, BEMAC supervisor for sales and marketing, told The STAR yesterday that the mock-up was created following a meeting with representatives of UP.

"Nothing is finalized yet" but the company hopes to augment the iconic Ikot and Toki jeeps of UP with the firm's e-trikes, Tolentino said.

The firm's 68VM e-trike could "make the Philippines the production hub for the Association of Southeast Asian Nations," according to BEMAC vice president Koji Yano.

The first EV to be produced in the facility is the 68VM e-trike, which retails for P450,000 and could be charged using any outlet. The firm's Cavite facility has a capacity of 500 units per month but could be expanded by another 500 units depending on demand.
Headlines ( Article MRec ), pagematch: 1, sectionmatch: 1

BEMAC wants to introduce its eco-transport system to educational institutions to contribute in the efforts to address environmental problems.

The possibility of e-vehicles plying UP follows the launch of similar e-transport systems in De La Salle University-Dasmariñas (DLSU-D) in Cavite and Ateneo de Manila University (ADMU) in Quezon City.

Since 2009, an electronic jeep has been plying the 27-hectare DLSU-D campus.

Retired DLSU-D professor Carmelyn Antig, who at the time headed the Parents Organization of La Salle Cavite, said the project was a parent-led initiative supported by the school administration.

"We decided to fund the purchase of an eJeepney to improve not just our transport system inside the campus but also to help conserve the environment. There is less noise, no pollution to the air. We called it the Ikot La Salle eJeep," Antig said.

An electronic jeep is also operating at the De La Salle College of St. Benilde in Manila.

In January, Ateneo president Fr. Jett Villarin led the launch of the eJeep service in partnership with Meralco as part of Ateneo's initiative to provide a sustainable mode of in-campus transportation.

The electric vehicles run at a cost of P4.70 per kilometer, almost half the cost for a regular car to run, and are 100 percent carbon free.

"I hope this is something we could replicate in other parts of the country and in the region," Villarin said.

Recently, the Land Transportation Franchising and Regulatory Board granted the request for a provisional authority of Global Environmental Transport Services Cooperative to operate an electronic jeepney route from SM North to Katipunan Avenue.

It adopts a cashless payment system and has designated stops where it can load and unload passengers. A system also allows the monitoring of operations, including the locations, of the e-jeepneys.

"We hope this is the start of replacing smoke-belching and poorly maintained jeeps with high-tech, efficient, and environmentally friendly e-jeepneys," he added.